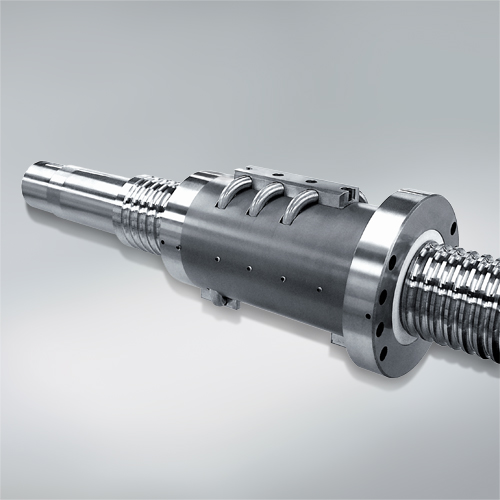 NSK presented the first HTF series of high-load ball screws 15 years ago. Back then, these innovations allowed the machine tool industry to realise very precise electromechanical linear drives in higher performance classes. The series has been continuously enhanced ever since. Each new range of components has brought with it improved speeds, quieter running and greater precision.

At this year’s EMO trade fair, NSK has showcased the latest generation of high-load, high-speed ball screws: the HTF-SRE series. The company’s development work focused on enabling even higher speeds for sizes with spindle diameters of up to 200 mm. Voices from within the industry – including renowned manufacturers of machine tools and plastic processing machinery – had called for just this.

The whole HTF series uses a patented ball separation system that prevents direct ball-to-ball contact, even in unfavourable conditions. In addition to this, the new HTF-SRE series features an improved ball recirculation system. This makes it possible to achieve higher traverse rates and significantly reduces operating noise. All of this enables the rotation speed of the extra large balls to be doubled for components with spindle diameters of 140 mm or more.
This new development boosts the ball screw’s characteristic dn value (mean spindle diameter x speed) to as much as 100,000. That corresponds to traverse rates of up to 833 mm/s.

Another improvement has also recently been made to the HTF series: newly developed A1 high-performance seals. These provide a very effective, long-lasting seal, even when they are exposed to heavy loads and high speeds. They therefore guarantee cleaner processes and reduce grease consumption in high-performance linear drives.