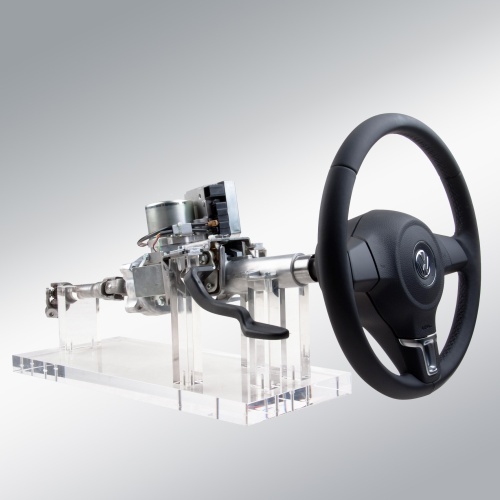 Thanks to its packaging advantages and rising power density, the EPAS column is being used for larger and larger vehicles. The highest-performance C-EPAS on the European market has an output of 8.5 kN and is used in models including the Renault Mégane Scenic.

The number of vehicles with electric power steering or electric power-assisted steering (EPAS/EPAS) is constantly growing. According to a market study published by Frost & Sullivan in 2009, some 40% of all new vehicles in Europe had EPAS in 2007, rising to around 45% a year later. Next year, the figure is expected to hit 65%, with approx. 75% projected for 2015. It is easy to explain this trend: there is a growing demand for the convenience of assisted steering, even in smaller vehicles, and consumers are keen to enjoy these extras without increasing fuel consumption. This trend is being driven by higher-spec smaller vehicles and by the substitution of hydraulic or electro-hydraulic power steering systems in larger vehicles, which use up to 0.25 l of extra fuel per 100 km.

Various types of EPAS available
Car makers can choose from various types of EPAS systems: the electric motor that supplies the torque for the assisted steering is either fitted to the steering pinion (pinion EPAS or P-EPAS), the rack (rack EPAS/R-EPAS) or the steering column (C-EPAS).
C-EPAS is the most popular choice for smaller vehicles. One of its advantages is that it does not restrict packaging in the engine compartment. NSK’s Automotive Steering Business Unit has developed the smallest system currently available on the market, which is used in the Toyota iQ. This steering system is the first where the torque sensor technology – which sends the activation signal to the power steering support – and the central control unit (ECU) are constructed as a single component. Integrating the electric motor, ECU and torque sensor technology reduced the weight of the steering module by 12% and its energy requirements by 6%. A high-performance electric motor is used to drive the power steering unit. This motor’s power density is up to 60% higher than that of conventional brushed motors. Thanks to the compact construction of the steering gear, the Toyota iQ’s designers were able to further reduce its front overhang.

Also suitable for larger vehicles
Due to its design, a C-EPAS system can only offer the driver assisted steering with a limited amount of torque, although this limit has constantly risen in recent years. The most powerful C-EPAS on the European market – at 8.5 kN – was also developed by NSK and is used in models including the Renault Mégane Scenic.
NSK is also setting the benchmark in terms of performance and power density for C-EPAS units worldwide with the steering system for the new Toyota Sienna. This system supplies 12.5 kN of assisted steering, making it a classic example of substituting hydraulic assisted steering and R-EPAS. It is based on a development platform that can be used in various vehicle classes, from small vehicles to cars with a cubic capacity of over 3 l.
The platform can be individually adjusted to the relevant market requirements. For instance, the steering characteristics of the assisted steering unit developed for the Toyota Sienna cater for the preferences of the Japanese market. Its power density is 23% higher than that of the most powerful mass-produced C-EPAS previously available, which is used in the Toyota RAV-4 and was also developed by NSK. As in the module for the Toyota iQ, integrating the motor and the ECU generates very dense packaging: the system is 800g lighter and 11% more compact. At the same time, its wireless construction enables greater efficiency.

Improved electronics drive developments
The high torque is enabled in part by an optimised motor winding procedure and an innovative engine management system. Control algorithms are stored in the ECU, which reduce the mechanical impulses and compensate for the steering’s reaction force.
These examples show that electronics play an important role in stimulating the improvement of the EPAS systems. In order to capitalise on these opportunities, NSK established a joint venture with Toshiba in September 2010. Based in Tokyo, the firm – ADTech Corporation – will drive the development of electric steering systems. While NSK is contributing its mechatronics know-how, Toshiba offers extensive expertise in the development and production of semiconductors. The new company’s remit is to further improve EPAS electronics and software. One of its focal points is integrating the signals sent out by driver assistance systems.

Technology centre for the European market
Despite the globalisation of the automotive markets and the desire for standardisation, individual markets have different requirements when it comes to steering systems – and OEMs have specific demands in terms of steering characteristics. To cater for this, in conjunction with European car makers, NSK established the European Technology Centre (ETC) several years ago. The centre pools the company’s European development capacities and has modern facilities capable of performing comprehensive tests on steering systems.
Major expansion work is currently under way at ETC due to the rise in demand for electrically assisted steering systems from European OEMs. This will allow the facility to take on much larger development projects including the associated series of tests. NSK Europe can therefore directly offer its customers a wide range of engineering services, without having to involve its Japanese development centres. This shortens coordination processes and development times, helping strengthen joint development projects with clients.
The expansion of ETC corresponds with NSK’s success in the European automotive market. The Volkswagen Group Award 2010 is testament to the fact that the steering systems developed (or co-developed) by ETC are designed and manufactured to strict quality standards. NSK received the award for the electrically assisted steering system it developed for the VW Polo Global. Following model-specific modifications and adjustments, this system will also be used in other vehicles produced by Volkswagen AG in the future. During the development and coordination stages, the engineers from VW’s headquarters in Wolfsburg (Germany) worked closely with NSK’s developers in Maebashi (Japan) and ETC in Ratingen (Germany).

What is the limit?
According to current estimates by NSK, the maximum output for C-EPAS systems will not increase further. The company expects that R-EPAS and, above all, P-EPAS will continue to dominate the European market for rack forces of around 10 kN or more. For these types of EPAS NSK developed solutions that boast high power density and a very compact construction. NSK predicts that C-EPAS will dominate assisted steering up to 8 kN, while R-EPAS will take the lead in vehicles that need up to 15 or 16 kN.