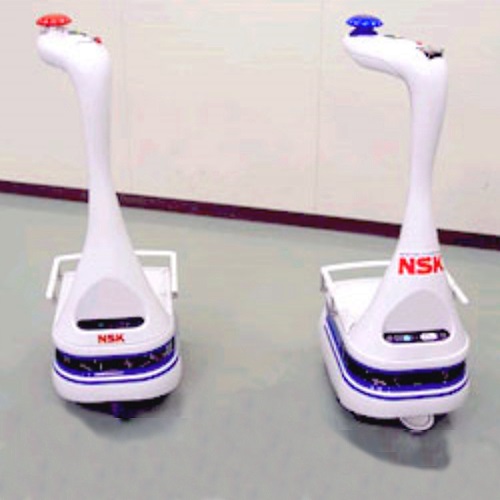 NSK Ltd. announced that it has completed experimental demonstrations of its autonomous guide robot that is equipped with indoor navigation and obstacle avoidance.

While LIGHBOT is still in the experimental stage, NSK has been working jointly with the Kanagawa Rehabilitation Center (Atsugi, Kanagawa Prefecture) over the past six months under conditions close to those of actual usage. This latest version has improved guidance, safety and usability compared to the version that NSK demonstrated at iREX 2013 (International Robot Exhibition). NSK will apply the knowledge obtained through this latest round of experimental demonstrations to solve remaining issues in preparation for the introduction and practical application of LIGHBOT in 2016.

NSK had previously developed a wheeled robot that could detect the desired direction as well as automatically avoid obstacles along the corresponding path. This technology can be applied in place of guide dogs for improving mobility assistance devices for the elderly and others.

The robot that NSK developed in 2013 was capable of moving to locations registered in advance by users and was also capable of estimating its own location based on map information and distance traveled. It could also detect obstacles and provide voice guidance to the destination. Since that time, NSK has made many improvements through various rounds of experimentation. This latest robot has greatly increased handling and can safely guide users to destinations in a wide variety of buildings such as hospitals and government offices, even when the user is visiting such buildings for the first time.

(1) Enhanced Navigation Functionality
The previous robot was such that the user would follow the robot's voice guidance, and the user would also provide feedback to the robot regarding the direction they wish to proceed by controlling the directional grip on the robot. The robot would then guide the user to the destination while avoiding obstacles. This latest robot is now capable of automatically guiding users to the destination selected by the user, although the user still provides feedback to the robot through the grip. For example, the force that the user applies to the grip controls the speed of the robot and the robot will come to a gradual stop should the user release the grip.

(2) Improved Convenience
This latest robot is capable of detecting markers on the ceiling of each floor in a given building to recognize its current location, thereby making it possible to use the elevator to navigate through multi-level buildings.
In addition, with the previous robot, users had to remove the battery to charge it, but this robot can now be easily charged by plugging it in to an outlet, eliminating the need to remove the battery. Also, the battery stays charged 30 percent longer.

(3) Verification of Existing Functions
NSK has also carried out performance verification of the safety of this product for the following functions using a variety of visually-impaired users. Based on the results of this verification, NSK will continue to perform modifications in preparation for its introduction and practical application in the future.
• In addition to the detection of obstacles along its path, this new robot is now equipped with a line-of-sight obstacle avoidance function that prevents head-on collisions with objects.
• This new robot's voice guidance is also capable of alerting people in the area.

Anticipated Applications
NSK envisions use of this product in barrier-free, indoor environments such as hospitals and public buildings to assist the visually impaired in safely arriving at their destination. This will provide users with peace of mind, especially when visiting places for the first time and locations where they could otherwise easily get lost.
In addition, this new robot will also help reduce the workload of building facilitators needed to escort and explain to such visitors where to go. 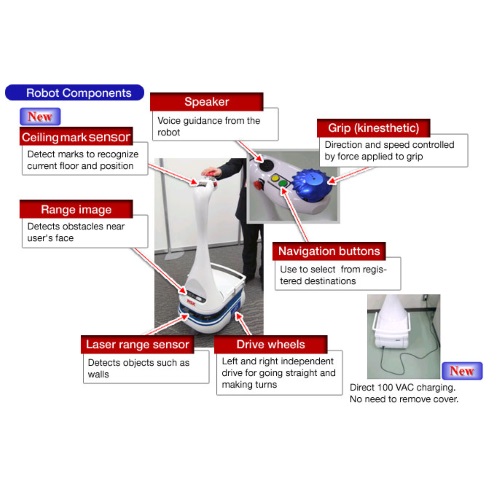