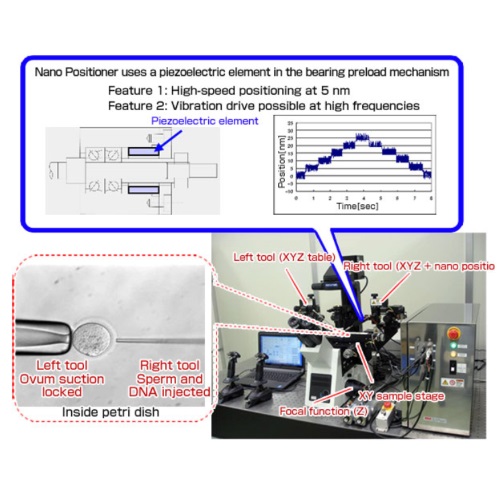 NSK Ltd. announced that its manipulation system now complies with North American UL Standards. NSK developed the system for micro applications in the medical, biotechnology, and electronic component industries, and it has been praised for its high level of safety and durability. NSK launched sales in the U.S. in February 2015, with the first unit delivered to a biotechnology research center. Future NSK aims to increase sales by targeting cutting-edge research institutions and universities as well as manufacturers of compact electronic components and companies in the precision machinery industry in the U.S.

Information on the Manipulation System

NSK's manipulation system is composed of a microscope and a 3D (XYZ) table equipped with a tool for manipulating micro size test samples such as cellular material. Such systems are very common in the medical, biotechnology, semiconductor and electronics industries. In 2008, NSK developed a high-precision, easy-to-use manipulation system by combining precision positioning drive technology with state-of-the-art image processing technology. Later, working in cooperation with Japan's Central Institute for Experimental Animals, NSK ran a variety of tests on the system and, in 2014, was successfully in achieving micro-fertilization of an experimental animal. The system was adopted by the Central Institute for Experimental Animals for its improved operational efficiency, more compact design, and improved automation.

NSK responded to the requisite standards of the National Recognized Testing Laboratories (NRTL: US national certification testing laboratories), a civilian institution that is authorized to carry out a variety of product safety and authentication tests based on the Federal Standard, thereby demonstrating compliance with UL safety standards established by Underwriters Laboratories. The system fulfills safety requirements for measurement and control, and as an electrical device for use in laboratories, as well as specific requirements for medical devices used in in-vitro diagnostics.*

*:Diagnostics for biology experiments such as in-vitro and conditions that require artificial construction outside the body.

Features of the New Manipulation System

Carrying out micromanipulations while looking through a microscope places a heavy burden on the operator. Additionally, operators must take particular care to prevent their own movements from shaking the equipment. On top of this is the challenge of entering and leaving a specialized cleanroom environment, which is necessary to prevent contamination by dust and microorganisms. The most recent modifications have made it possible for anyone to operate the device, while viewing images on a monitor, while also making remote operation possible, significantly reducing the burden on the operator.

Working efficiency has been improved thanks to the automation of repetitive operations.

By converting many of the operations from manual operation to powered operation, and switching operation handles to easy-to-see buttons, electronic control has been made easy, eliminating the need to rely on the intuition of a highly skilled operator.

The results of compliance assessments in drop and shock-resistance tests of electrical equipments enables NSK to declare that the system meets the requirements of a compliance assessment report issued by the civilian institution, indicating compliance with UL Standards, the most widely adopted standards in the U.S.

NSK is dedicated to applying its world-class technical capabilities to meet the future, state-of-the-art needs of industries around the world.