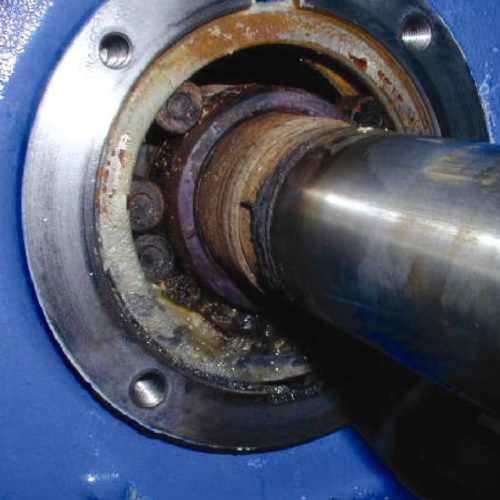 NSK’s experience of the petrochemical industry was pivotal in solving a recurring bearing problem, which was resulting in unacceptable downtime at a UK refinery. The problem concerned a centrifugal pump that was critical to the refinery operation. The pump was failing on average three times a year; and with breakdown costs running at €1,500 per hour, this was resulting in losses of €27,870 per year.

The problem with the centrifugal pump centred on a cylindrical roller bearing, which was failing inexplicably following the transition from belt drive to direct drive on the pump - a modification undertaken to simplify the drive train and improve the overall efficiency of the pump drive.

Faced with this continuing problem, the refinery operator called in NSK to provide a solution. NSK has a wealth of experience, globally, both of the petrochemical industry in general and of centrifugal pumps in particular; the company has introduced many new bearing products which provide improved efficiency, reliability and life in centrifugal pump operations.

This experience was deployed in an investigation of the operating parameters of the pump; in particular to ascertain the reason why the problem began after the change from belt drive to direct drive. NSK engineers studied the inner raceways of the failed cylindrical roller bearings and also calculated the radial loads that were exerted on the bearings under both forms of drive: belt and direct drive.

What they concluded was that the change from belt to direct drive had drastically reduced the radial load on the cylindrical roller bearing. This reduction in applied load was causing the bearing rollers to skid on the bearing’s inner raceway, resulting in progressive damage that eventually caused the bearings to fail prematurely.

The solution proposed by NSK was a simple one: replace the cylindrical ball bearing with a lower friction deep groove ball bearing. This solution was adopted by the refinery, and has proven to be totally successful, with not a single failure since the bearing substitution was implemented.