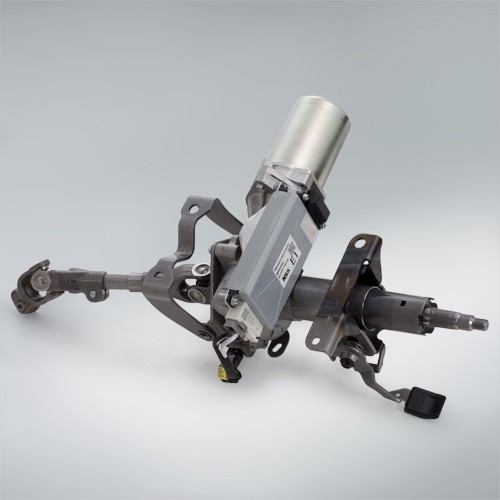 On the Right Track

NSK’s Steering Business Unit has produced some 25 million steering systems since 1988 and is amongst the market leaders for electric power steering (EPS). The unit is successfully focusing on the fast-growing segment of column EPS (C-EPS). A major development goal is to heighten efficiency so as to realise C-EPS systems for larger vehicles that use the same amount of energy.

The Automotive Steering Business Unit at NSK aims to be the world market leader for electric power steering (EPS) by 2015. This is the company’s clear goal, and it looks like NSK is well on the way to achieving it. They already have the necessary background knowledge: the very first EPS system to be used for a mass-produced car (MG-F in 1986) was manufactured by NSK. In 1999, the company also supplied EPS for its first mass-selling model, the Opel/Vauxhall Corsa.

This shows that, even at an early stage, NSK recognised a market that has grown considerably in recent years. EPS steering systems are in demand in the A, B and C segments as car buyers increasingly seek comfortable assisted steering, and these systems require significantly less energy than hydraulic or electro-hydraulic power steering systems (HPS/EHPS).

NSK was able to draw on extensive experience with both steering and electric drive systems when developing its first EPS models as the Automotive Steering Business Unit has been developing and producing mechanical steering columns since back in 1968. On top of this, the Precision Products Business Unit has been specialising in industrial electric drive solutions for many years. The product portfolio offered by this Business Unit includes torque motors and linear drive systems for sophisticated industrial applications, such as machine tools. Thanks to all this, the company already had a profound knowledge of electric drive systems – something that is not necessarily true of most automotive steering system manufacturers.

Originally, NSK’s Steering Business Unit worked predominantly for Japanese car makers. Toyota’s Japanese ‘transplants’ (in locations including Burnaston [UK], Valenciennes (France) and Adapazarı (Turkey)) enabled the company to gain a foothold in Europe too. A joint venture with Torrington, which was fully integrated into NSK in 2000, served to further expand the company’s business operations in Europe. This, of course, also includes on-site support for clients, for example in Guyancourt (Renault and PSA) and Wolfsburg (Volkswagen).

The European Technology Centre (ETC) in Ratingen is being consistently extended as a development ‘bridgehead’. Jean-Charles Sanchez, Managing Director ESBU (European Steering Business Unit), comments: “We are pooling our European development activities here. On the one hand, the engineers at the ETC work closely with our R&D colleagues in Japan. On the other hand, they also collaborate with our clients’ development teams. We also have modern testing facilities in Ratingen, enabling us to conduct a wide range of tests independently. This safeguards efficiency and speeds up the process of transforming an idea into a mass-produced article.”

It is easy to explain why car makers were so interested in the EPS systems right from the start: the systems only draw energy when the power steering is actually in use. This means that there is no need to store energy reserves, which are crucial for hydraulic power steering systems. In practice, this considerably reduces fuel consumption: when used instead of a conventional hydraulic steering system, an EPS system can reduce a compact car’s average consumption by 0.2 to 0.4 l/100 km.

As is the case for all new systems, subsequent generations of NSK’s EPS system underwent further optimisation. One of the key development goals was – and remains – to provide the driver with the best possible feel for the road and the steering behaviour. This intensive development work, which took place largely at the software level, was a resounding success: the EPS steering systems that NSK manufactures for current vehicle models are unanimously praised by testers for their directness and the gentle way in which the assisted steering comes in.

The world’s most compact EPS

The same applies to the steering system realised by NSK for the Toyota iQ, which is the world’s most compact EPS. The designers achieved this by combining the torque sensor technology – which sends the input signal to the power steering support – and the central control technology in a single unit for the first time. This design calls for highly efficient heat removal – and once again, the NSK development team rose to the challenge.

By integrating the electric motor, steering gear, ECU and torque sensor technology, the vehicle developers were able to optimise the packaging and further reduce the car’s front overhang. The weight of the steering module was also slashed by 12%, while its energy consumption was cut by 6%. An electric motor developed by NSK is used to drive the power steering unit. This motor’s power-to-weight ratio is 60% higher than that of conventional brushed motors.

EPS for the Polo Global: Award from Volkswagen

NSK has also developed a tailored EPS system for another current mass-produced model: the Polo Global from Volkswagen AG, which is a relatively new client for the Automotive Steering Business Unit. Although NSK’s Automotive Business Unit has been supplying VW with components such as wheel bearings for quite some time, the Steering Systems Unit only started working for VW in 2008 and was awarded the contract to develop the electric power steering system for the new VW Polo Global.

The development work for the column EPS (C-EPS) rested on close collaboration between the VW headquarters in Wolfsburg (Germany) and NSK’s development facilities in Maebashi (Japan) and Ratingen (Germany). A special production plant was established in China to produce the EPS systems including the steering gears. At the plant, 400 staff are involved in producing the ready-to-mount steering modules, which will also be used for other VW vehicles around the world in future.

In June 2010, NSK was presented with a Volkswagen Group Award 2010 by Volkswagen AG for this column EPS. Explaining the reason for this award, Volkswagen emphasised: “You have convincingly demonstrated how to make the most of uncommon opportunities. You became a new VW partner in 2008 when you were contracted to develop an innovative C-EPS steering-column system for compact cars. This was the kind of new-new combination we do not normally advocate. The success achieved does, however, show that we were right to make that choice. Both the partnership and your project work are more than satisfactory.”

The integration of mechanics, electrics and electronics plays a major role in NSK’s current international, multidisciplinary development projects. NSK has extensive experience of this, both in the automotive sector and in other areas of application, such as robotics. The corresponding development projects are regularly showcased at technology trade shows. In total, NSK employs some 50 developers at its central R&D facility in Fujisawa (Japan), while approximately 200 engineers work at the application development centre in Maebashi (Japan).

Further boosting energy efficiency is a key focal point for many development projects. The electric motor offers potential here, as do intelligent combinations of the motor and the electronics. In addition to this, clients are increasingly requesting that the steering system be integrated into safety systems such as EPS. The same applies to lane departure warning systems and park distance control systems, which also affect the steering or analyse its signals. NSK has expertise in every stage of the development chain – including software development, where software safety is of prime importance.

The company’s work also focuses on developing highly efficient C-EPS systems for larger and heavier vehicles. Here, the development team faces a conflict of aims in that higher-performance electric motors do not provide drivers with as much information about the condition of the road and the vehicle via the steering. The objective must therefore be to increase the steering system’s efficiency in such a way as to provide the desired steering assistance using minimal EPS power. NSK is well on the way to achieving this and has now developed prototypes of C-EPS systems that can be used in vehicles with an unladen weight of around 1,650 kg and an engine output of over 180 kW and work in a very direct fashion.

It is easy to explain why NSK concentrates on the column EPS segment within the EPS market. For example, a C-EPS requires much less space in the engine compartment than a pinion EPS. NSK’s expertise here ranges from ‘subcompact’ cars with a 600 cc engine, which are popular in Japan, to the whole gamut of compact cars and larger vehicles such as the Toyota RAV4 – an SUV which needs a powerful assisted steering system due to its substantial weight and high-volume tyres. NSK also supplies a C-EPS system for Renault’s whole Mégane platform, including the Grand Scénic with its substantial unladen weight of up to 1,720 kg.

NSK is constantly expanding its global production infrastructure in line with its customer structure and market volume. Jean-Charles Sanchez says: “If you want to become market leader, you have to establish the necessary capacity. That is why, as well as setting up a new plant in China in 2009, we also opened a new factory in Poland back in 2005. At this site, 450 employees produce steering systems, primarily for Renault/Nissan and the European Toyota plants. In addition to this, the NSK production network with plants in Poland, India, China and North and South America offers us numerous ways to be flexible and provide manufacturing services.