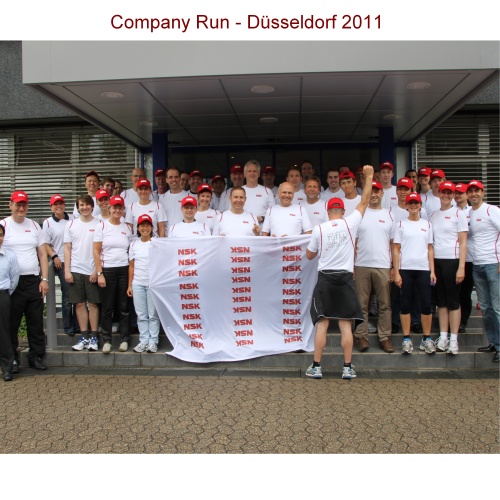 NSK joined in the third annual Run4ideas charity run in Düsseldorf with an international team of 45 employees – and everyone made it to the finish line!

The starting shot for this year’s run was fired on 22 June at 7.00 p.m., and the 442 teams were off! The more than 3,000 runners enjoyed lovely weather as they made their way down the 6.5-km-long course from the Theodor Heuss Bridge in Düsseldorf to the exhibition grounds and back again.

The first NSK team member reached the finish line 25 minutes after the starting shot was fired, the last one took 49 minutes. No one gave up, and most of the team – especially the ones who ‘just’ wanted to reach the finish line – were truly at their best, motivated by the others to keep up a strong pace.

NSK was running as a team for the first time, and of course, new outfits for the race were a must. With their eye-catching red NSK caps, the large team really turned heads. Additionally, their new running shirts with the slogan ‘SEARCHING FOR TOTAL QUALITY? JUST FOLLOW!’ prompted a number of humorous comments both during and after the race.

The organiser of the race donates €5 from each entry fee to charitable causes. Of that total, €1 goes to a facility for traumatised children in Düsseldorf, while €4 go to a fund to support earthquake victims in Japan.